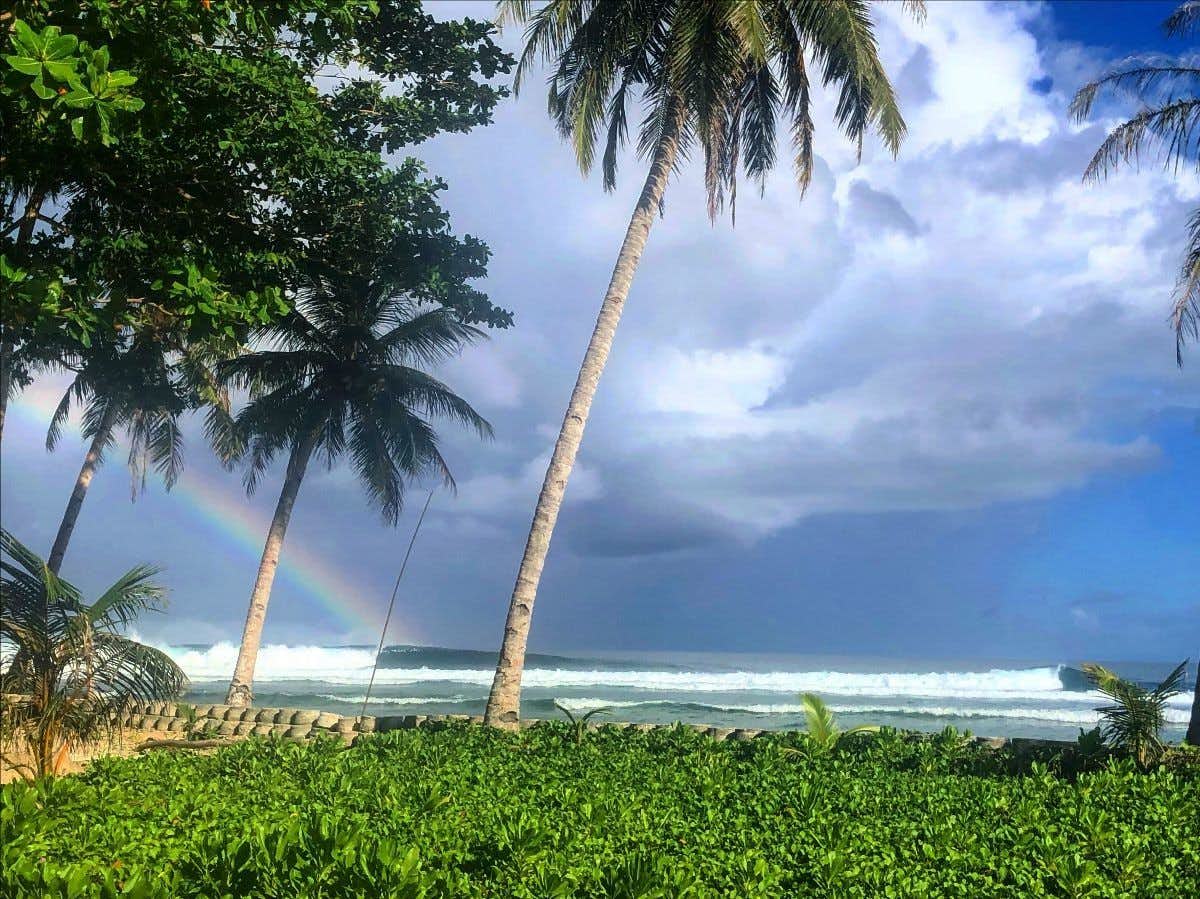 "Experience the consistency, quality, and intensity of our incredible waves. Stretch your legs on land or choose to surf right in our backyard. Come with your group or make friends here. Walk to the bar when you’re feeling social or just relax in a hammock by yourself. The choice is yours and you have a beautiful, pristine place to make everything happen. Island life is a good life!"
— Eric, Southern Mentawai Outpost

No verbal description of a wave can do it justice. Each surfer will have their take on what the wave is like for them. There’s every type of break-in lefts and rights. There are waves for all wind directions, all swell sizes. There is always something to surf around Southern Mentawai Outpost.

Another huge benefit to this is that we always know when the swell has hit and what the direction is, just by looking out front to see how the wave is breaking. We aren’t governed by the guesswork involved in getting swell forecasts and crossing our fingers that the prediction was correct and the wave we traveled to that morning is working. When deciding where to surf, we use our site.

Sibigau is situated in a prime location for day trips to surf lots of waves nearby. It’s possible to wake up before the sun, paddle straight out to the lineup, or hop in the boat and get dropped off out the back, bag a morning session, refuel with a nice meal on land, and get back in the boat to explore the many waves nearby! We have more than ten waves in a 10-mile radius! Come live on land, relax in a hammock, climb a tree, explore the solitude of the jungle, watch the wave all day while you’re not surfing it, or shredding waves close by, then retire to your private bamboo house with a queen-size bed or share with a friend in a double, get a good night’s sleep and be ready to do it again!

We’ve searched out our bamboo in the jungle of Central Sumatra, cut it down ourselves, transported and cured it at the facility that we built in Padang, loaded up our boat, and brought it to our island.

Every floorboard you stand on at SMO has been milled on-site, either from dead trees on the island or driftwood from the beach.

Our houses are truly a work of art, built with love and respect for the dream and for our planet.

The Wall Bar is SMO’s wavefront bar and restaurant. Kick back and have a few cold ones in a shaded hammock or join the peanut gallery. Hot food, cold beer, waves out front – Check! Check! Check!

Our newly completed main building is ready to rock! One side is set up for family-style dining. The other side has smaller tables with chairs and couches. The buffet bar looks into our stainless steel and bamboo kitchen. The ocean side is complete with bar stools and bar tops facing the wave. In fact, you can keep your eye on the lineup from every seat in the house!

From two with a vision to three friends on a mission, Southern Mentawai Outpost started in the mind of Eric, became a reality with Ian, and further to completion with Alex. We set out to create a sustainable piece of paradise in front of one of the most consistent waves of this world.

Eric started his adventure in Indonesia when he landed a job on the surf charter boat “Strictly Business.” After two and a half years on the “Strictly Business” and more chance encounters, he was honored to have a guest ask him to look for “the perfect surf charter boat” to refit and operate. Some luck and seized opportunities led him to find an ex-ferry boat that was beyond the wildest dreams and in the price range. The former guest financed the boat and Eirc refit what would become the “Addiction. He led more than 200 surf charters in the Mentawais and outer islands of Sumatra. In addition, he searched the coasts of Java and Sumatra for surf by boat.

From G-Land to Aceh, he delivered over 1000 people, mostly return guests, the “Perfect Surf Trip”, but in all those miles and famous surf spots, his favorite spot was Thunders. It always has a barreling wave and it’s offshore all day and all night during the Southerlies he experienced for most of the swell seasons since 2006. During charters, Eric would often base himself at Thunders waiting for swells to hit and then surf the surrounding spots.

Ian started his dream of building a surf resort after a family surf trip to Costa Rica. He continued traveling through Central America, but in 2009 we went to Indonesia to visit an old buddy and surf legend, Johnny D, and this was when he fell in love with the culture, the natural beauty, and of course, the waves.

In July of 2012, Ian and Eric met. By the time Eric was working with his 80′ surf charter boat, “Addiction.” They both shared a similar dream of building a surf resort and Eric knew just where to build it, at the most consistent wave in the Mentawai Islands, Thunders.

Southern Mentawai Outpost is designed for people who want to experience the consistency, quality, and intensity of the incredible waves offered by the Southern portion of the Mentawai Islands. At the same time, you can take a guilt-free vacation knowing that you are leaving the smallest possible impact in a beautiful, pristine place – something that is becoming a commodity in today’s crowded and often polluted world. We are confident in stating that no other resort in Indonesia is taking the same steps as we are to encourage and maintain sustainability and support the local community and economy. If this matters to you as much as getting barreled on your surfboard, then your choice is clear: make SMO your Eco-conscious Surf Resort destination.

Today we have expanded into working with the Indonesian government to make the previously uninhabited island of Sibigau a nature preserve in which we will be the stewards of the land. We are excited to grow into nonprofit businesses, teaching the local people of Mentawai how to farm more crops and build boats without chopping down old-growth trees. We look forward to sharing our stoke for this island and the perfect waves of the Southern Mentawai zone with you!

Do I need a Visa?

It is free to enter Indonesia and stay for 30 days. If you would like to stay longer than 30 days, you will have to purchase the 30 day VOA for $35 when you land. This visa is extendable with a local... read more

How much are the baggage fees?

Because some guests travel with way more gear than others, overweight fees are the responsibility of each guest. The standard board coffin is 350.000 IDR (about $25 USD).

How much is the Mentawai Surfer Tax?

IDR 1.000.000/ about $70USD for the new surf tourism tax. This will be paid to the office at the ferry port. You will receive a wristband that is valid for 15 days. This is extendable.

Do I need Travel Insurance?

With Medical-Evacuation. This is mandatory. While we strive to keep you safe, accidents can happen. The cost is typically around $60. Please book with a 3rd party of your choice and bring a printout o... read more

Tipping is not mandatory but always appreciated! The average tip is roughly $10 USD per day and is distributed among the local staff. IF you wish to tip someone who made your trip extra special, pleas... read more

Cancel and get a full refund within 48 hours of purchase, or at least 90 days before the trip starts.
Learn more