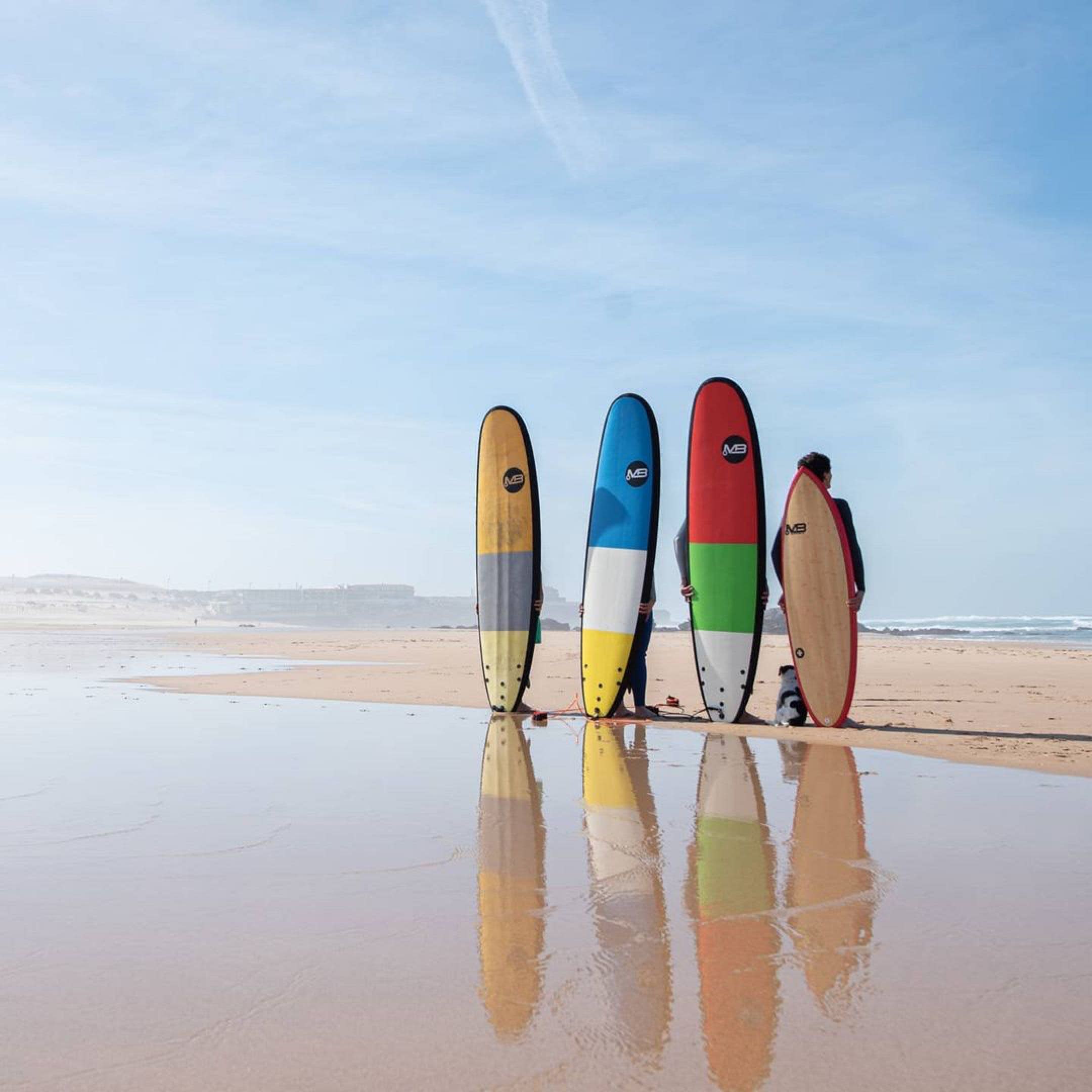 "Right in the middle of a natural park, our house is surrounded by nature and tranquility. Explore our most exotic beaches, ride some of the best waves on our coast, visit historical villages and the charming cities of Sintra and Cascais - just a short drive away, and try some of our most typical and delicious dishes. This will truly be a nature adventure and a cultural trip experience!"
— Mariana, Moby Dick

The coast of Portugal is well known for its year-round consistency and the Lisbon coastline is no exception! Here we are lucky to be able to check both west and south-facing coasts, therefore we can always find a good match for your level of experience and adjust according to the wind, swells, and surf conditions.

In this region, highlights include great breaks at Guincho, Adraga, São Pedro do Estoril, Carcavelos, and Praia Grande. A bit further from us, Costa da Caparica is also a good option with its nice beach breaks, especially during wintertime. If you are still learning how to surf, then the best time for you to visit us would be between June and September. On the other hand, if you are familiar with surfing, visiting us during April, May, October, and November is a good idea to make the most of the perfect-swell waves. Carcavelos and Caparica are some of the best options during wintertime, but during summer we definitely choose Adraga, Guincho, and west-facing peaks around our surf lodge!

We are right in the middle of the Sintra Natural Park, home to a diverse ecosystem with more than 900 plant species and 200 animals. Our lodge is a renovated antique house with a living room, kitchen, seven comfortable rooms, a ping-pong table, wifi and an outside area with a couch and hammocks.

All we want is that you feel at home, whether you’re eating in the dining room, lounging in the living room, or sunbathing outside. There is plenty to do: trails in Serra de Sintra, bike-ride, surf, kitesurf, try the most traditional Portuguese cuisine with a typical barbecue made in our grill or relax at Guincho Beach, 5 minutes away!

We want to make learning an easy and fulfilling experience, making the most of it. We are certified instructors, experienced surfers and most of all we love the ocean. Our surf coaches and surf instructors guarantee unique moments of fun and safe learning. We do careful planning, adjusted and personalized according to the level of experience of our students.

Our surf school has classes for those who have never been in contact with the sea, for those who already surf but don’t feel safe surfing alone yet and also for advanced surfers who want to share experiences and improve their techniques.

Paulo Machado, owner of Moby Dick, and his brothers were pioneers in surfing in Portugal. Back in the 70’s, it was very unusual to see boys carrying surfboards under their arms, and there was yet no surfing in Portugal, and not many would venture into Portuguese waves.

In 1968 Paulo’s grandmother brought a surfboard for him and his brother made of styrofoam from Brazil. This was the beginning for them and that's when their passion for the sport started to be born. In 1975 Paulo inherits his first surfboard from his older brother Pedro, and, a few years ago, they represent the family in Portugal’s first surf competition, in Ribeira d’Ilhas, Ericeira.

Throughout the years, Pedro and Paulo got to know more people from the surf industry, got better equipment, and started to get known for its abilities on the water. In 1978, the two brothers founded the Surfing Clube de Portugal, Portugal’s first surfing club that still exists. In the early 80’s, their young brother Nuno also starts surfing. Today not only Nuno but also his children, Kiko and Nuno, surf with them.

In 2014, Paulo opened the Moby Dick lodge, in Malveira da Serra, Cascais. Moby Dick is a surf house for ocean aficionados and aims to honor the surf spirit; it is a place to share experiences and connect. One year later, they opened the Moby Dick Surf School, to teach people how to ride waves in a deep connection with the ocean and nature. Both concepts aim to pass on the surf culture, as both a sport and a lifestyle.

Today the school counts on the teachings of professional surfers and certified surf instructors, who believe that surfing is more than a sport, it is a healthy and balanced lifestyle.

The surf culture is about truly connecting and sharing with others, discovering more about yourself, others, and our planet. Embracing our fears, and pushing forward. Surfing is salt and sand, waves and sun, it is a constant lesson… it is about challenging and trusting ourselves. It is relaxation and connection. Join us on this adventure - we want to teach you and learn with you!

Cancel and get a full refund within 48 hours of purchase, or at least 90 days before the trip starts.
Learn more